1. SPIN THE DAWN by Elizabeth Lim

- It's a Mulan retelling but with an imperial tailor so there is both badassery and gorgeous clothes which is the best combo really.

- There is ship you would 100% get behind and with lots of adorable bickering. It has a bit of enemies to lovers which is everyone's favourite trope ever

- So much magic everywhere including the writing which is the most magical of all and I will read anything that Elizabeth Lim writes.

- And now is the perfect time to read the book as the sequel will be out soon and the cliffhanger will only kill you for a short time.

- It has a protagonist who wants to work in a library. A dangerous library

- There is so much sweet bickering again and I just wanna squish the two together and order them to kiss.

- There's a sarcastic demon who kind of rolls his eyes at everything humans do. We love him.

- Also did I mention there are libraries with living books? 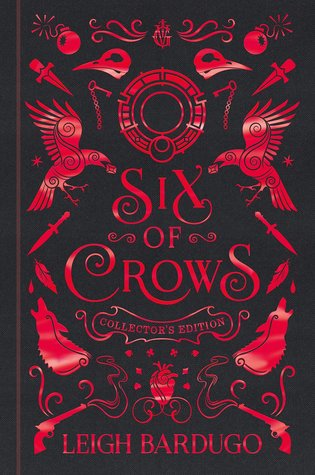 - First off, YOU HAVEN'T READ SoC? I am judging you. Just kidding. Or am I?

- There's a gang of misfits planning a heist which obviously means there is going to be utter pandemonium and a lot of screaming plus tears.

- There is absolute brilliance happening all around. The plot will slap you with twists left and right.

4. A CURSE SO DARK AND LONELY

- It's a Beauty and The Beast retelling and aren't we all suckers for those?

- There's a badass heroine who doesn't take shit from ANYONE. She doesn't care if you're a prince or how handsome you are. SHE WILL END YOU.

- Two cinnamon roll boys you want to protect and at the same time whack on the head. Aren't they the best kind?

- Beautiful writing that is just absolutely delectable and also book two released recently so you can read it back to back.

- There is magical castle which should be reason enough to read the book.

- There are once again a gang of misfits trying to pull a heist and also all of them have other things going on that makes you just want to hug them and go "there, there"

- The characters are all badass but also soft and you'll definitely want to protect them with your dying breath.

- There are lots of puzzles and brainy characters trying to break them which is my jam.

- There were all kinds of diversity so kudos to the author!